I’m completely obsessed with shutters since I had some installed in my old dining room (now a playroom so just a tad wasted beneath the mountains of brightly coloured plastic toys). 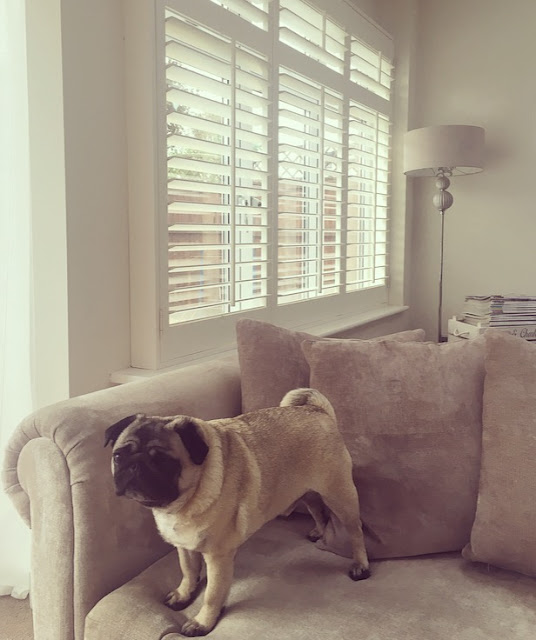 Seeing as our lounge extension is too light to even watch TV in due to being south facing, we started looking in to options, with shutters being the only choice in my head due to their beautiful, timeless look. We came across California Shutters which is an online company specialising in supplying whilst offering support for you to measure & install yourself to save £££. You simply enter your measurements on their website for an instant quote. 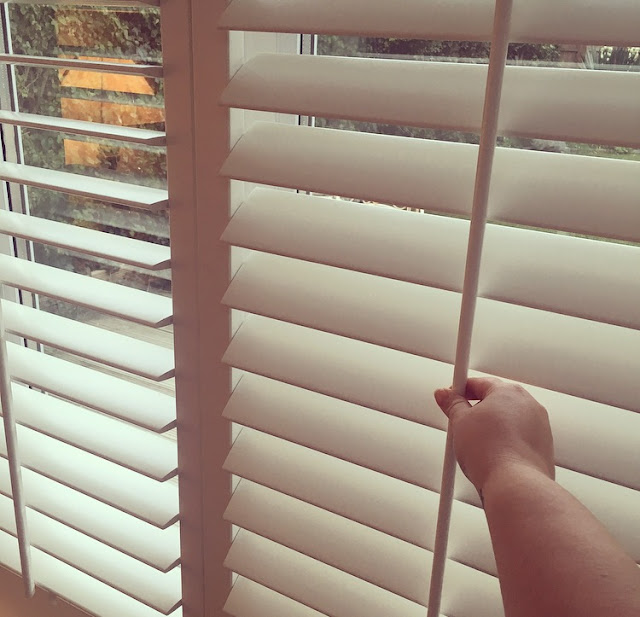 When we had the dining room ones installed over a year ago, I had no idea that you could purchase ‘Do-It-Yourself’ shutters online & so contacted some UK based installation companies who came back with what I now realise as crazy prices. We went with the cheapest option which still cost us over £1,000 for cafe style (half height) on one bay window.

With typical shutter companies you are paying an extortionate price for somebody to simply measure up (think £2.00 for a tape measure & 10 minutes of your time…) & fit (a drill, a spirit level & couple of hours max OR even paying a handyman would be cheaper if you aren’t a DIYer). They are all manufactured at the same place in China (hence the up to 10 weeks delivery time) so essentially the same thing. 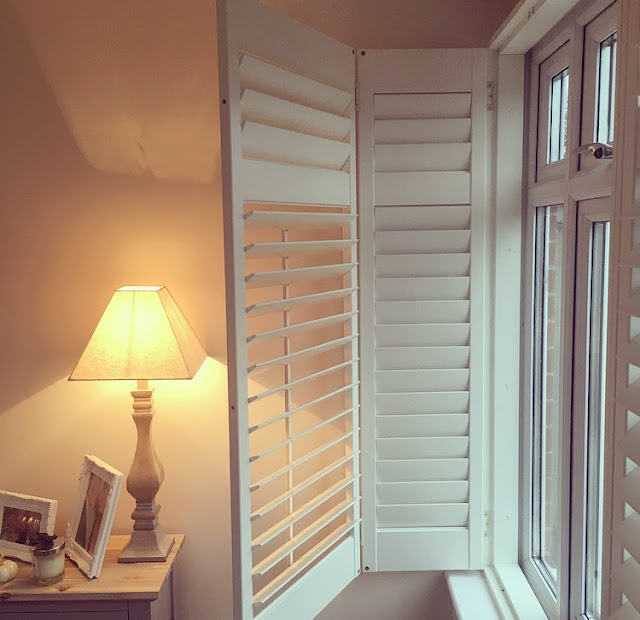 So, this time around I was a bit more clued up & thought I’d tell you all about my experience with California Shutters. I know from the hundreds of messages & emails off my Instagram stories that you are all keen to hear more!

Here’s the process I went through –

Firstly I called the customer services team due to being slightly confused & concerned about how to measure correctly & what type of shutter to order. I was told to watch the online tutorial videos they provide on how to make accurate measurements, then complete the online order. After this a member of the team would be calling me as well as being in email contact to provide help/advice & finalise plans before then being sent off for manufacture, up until then any changes that need to be done will be sorted.

I ended up emailing pictures of both my windows to my contact, Louise, who was absolutely brilliant & replied almost instantly to my constant emails of questions as well as worries. Measuring yourself when you’re spending a considerable amount of money is always quite scary & I was nervous they’d turn up & be far too big/small.

Louise gave me lots of advice & changed some of the measurements for the perfect fit with her expertise. As my windows weren’t the typical outside mount frame due to having two sides with an inside mount, they asked for the predrilled holes to be changed to account this as well as a few other slight alterations such as which way the shutters should fold back, slat size & so on. I’d have never been able to work this out by myself without the incredible customer service received. 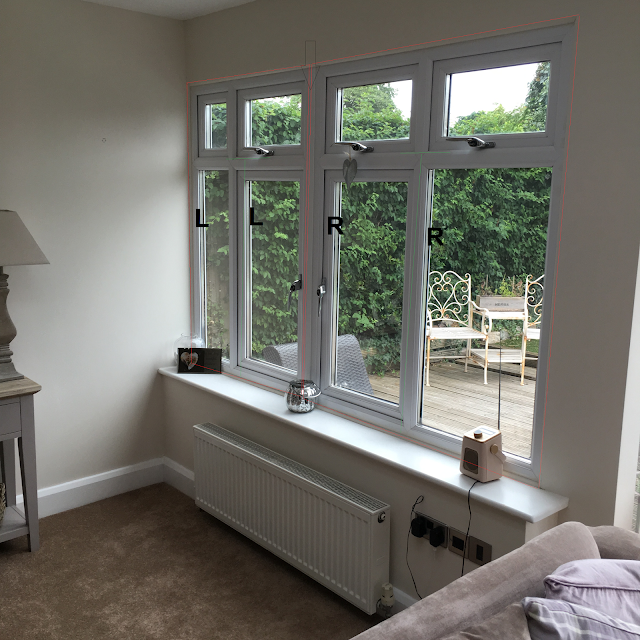 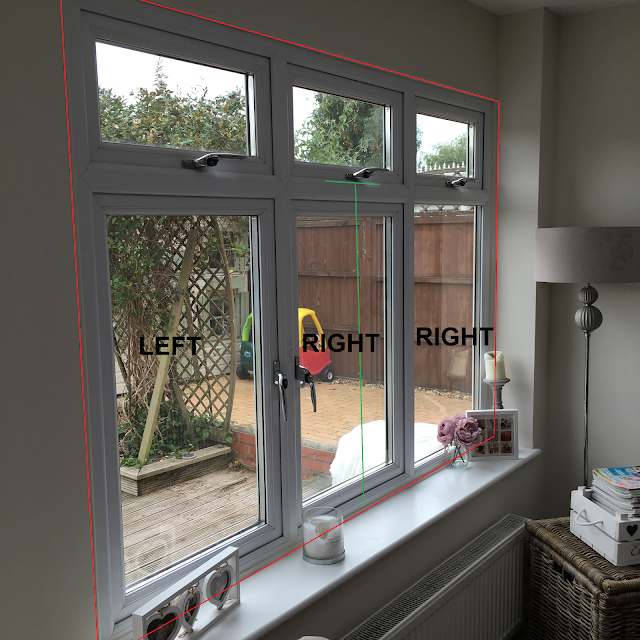 After what seemed like a million emails to & forth (she must be glad to finally see the back of me now..), we finally finalised the plans which were drawn up by by the factory (see below for an example of mine) ready for my approval & then came my wait, which isn’t easy for somebody so impatient as me but ended up being only 7 weeks. 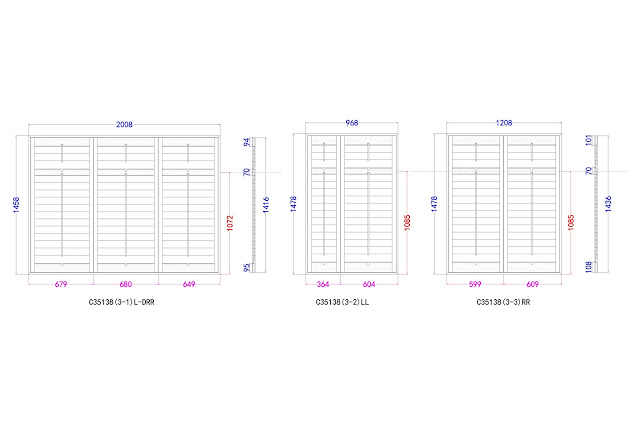 I received an email informing me that they were expecting my shutters to arrive in the UK this week & then a phone call to arrange delivery as soon as they received them in their warehouse.

They were delivered yesterday afternoon & so I begged my husband to put them up for me last night (well I had been waiting 7 weeks already…). I expected him to just get the frame up on one side that evening but after 3 hours we sat back & admired both of our new shutters. 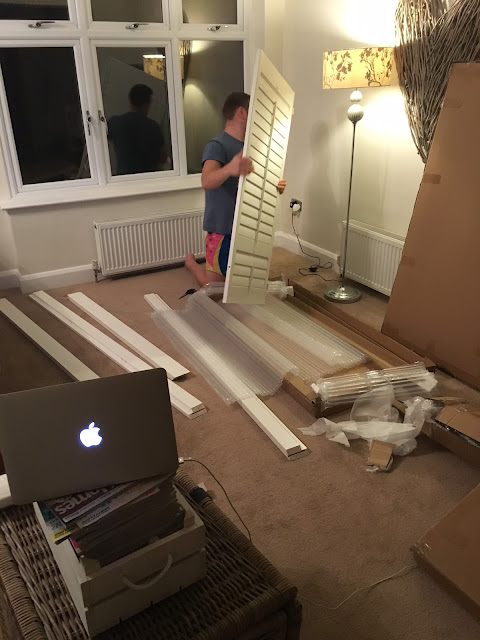 Putting them together was surprisingly easy by again following the tutorial videos provided by California Shutters which guide you through the process step by step. We watched the whole thing once first then went through step by step from unboxing (mine came in 10 huge boxes which were all clearly labelled to identify which window & what the contents were) to installation.

I honestly thought it would be a nightmare & with most things, the tutorials would make it look FAR easier than it actually is BUT honestly, they were ridiculously easy & I think I could have done them by myself without husbands help. The holes were predrilled & despite the windows not being the ‘norm’, they went together without any hiccups (or swear words…) at all. 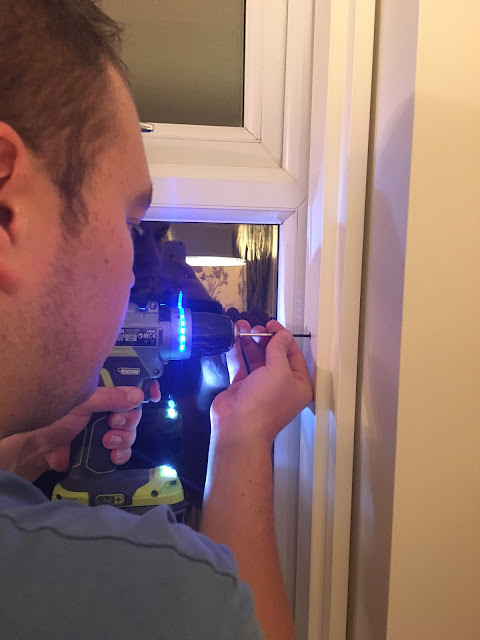 The first step was putting the shutter frame together then securing it to the wall/window frame. All fixings are provided including drill bits, screws & so on. 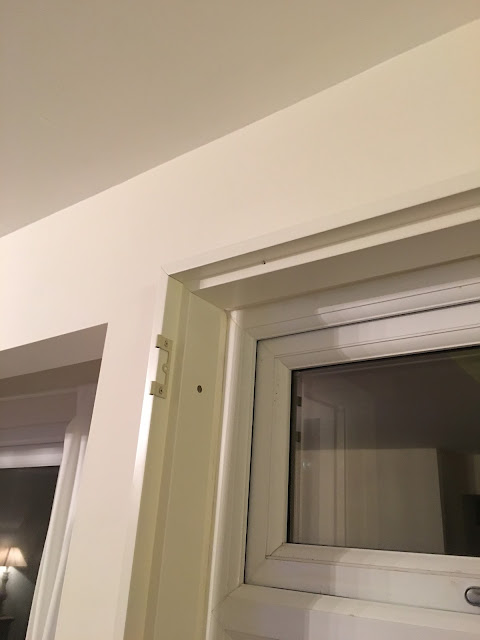 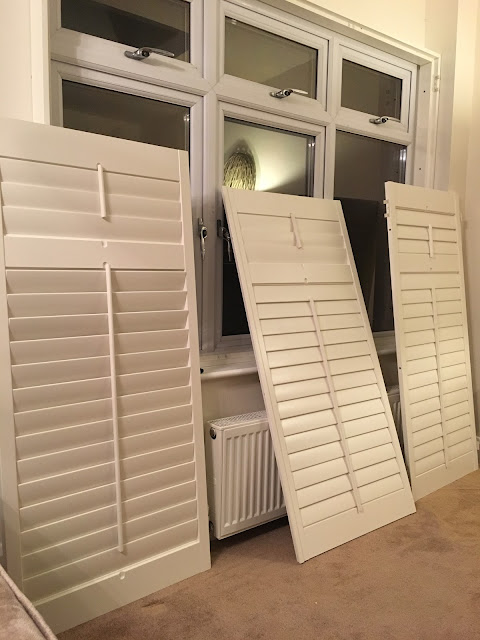 We then worked out which shutter should go in which section & secured these on. 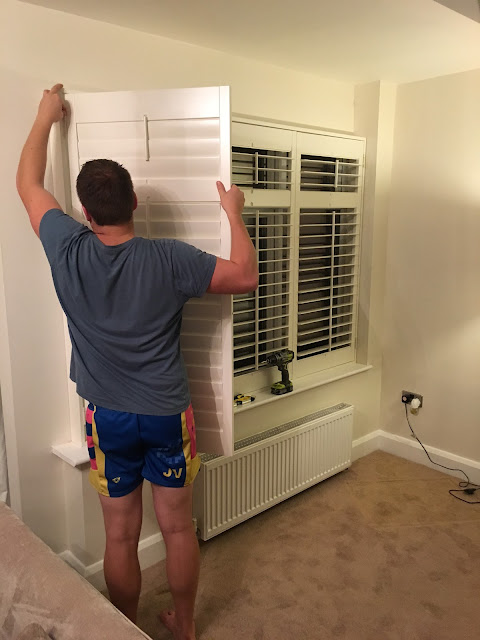 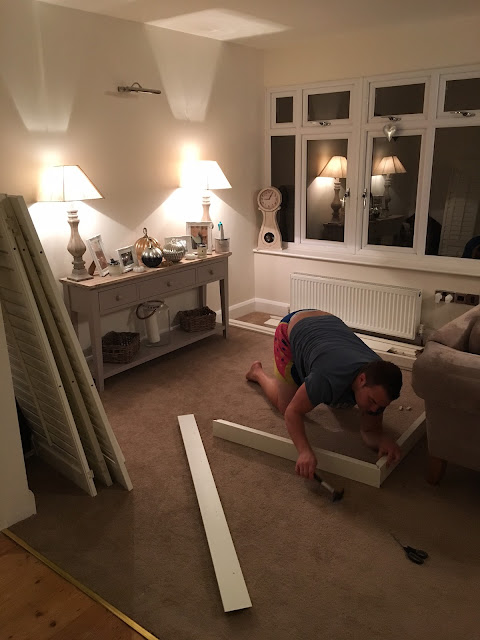 Window number 2 was slightly more tricky due to the odd window sizes so came in 2 separate frames which then attached together. 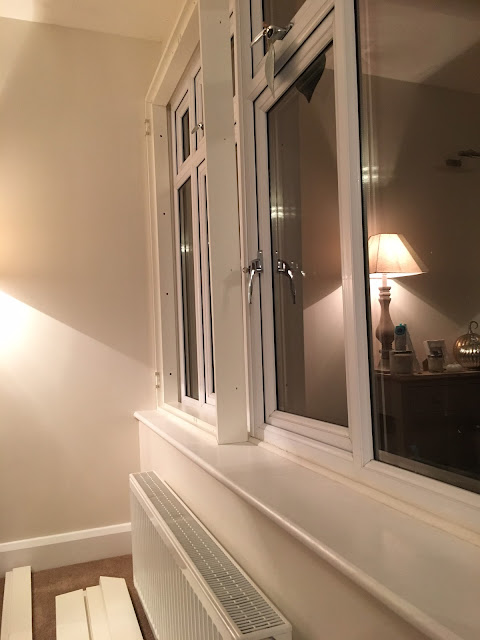 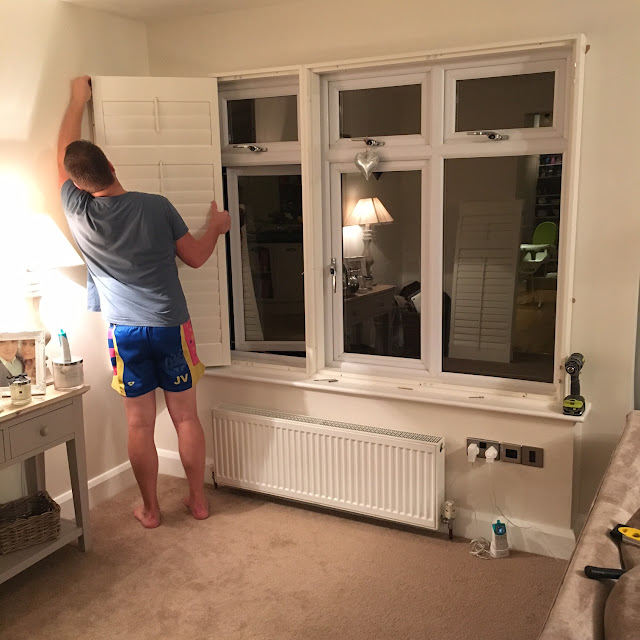 I’m SO over the moon at the shutters. After being initially worried about how much light they’d block out, I’ve found that in fact they give off a softer more calming light which really makes a space feel cosy rather than dark & dingy. They’ve really finished off the room as well as enabling us to actually watch TV during the day & providing privacy. 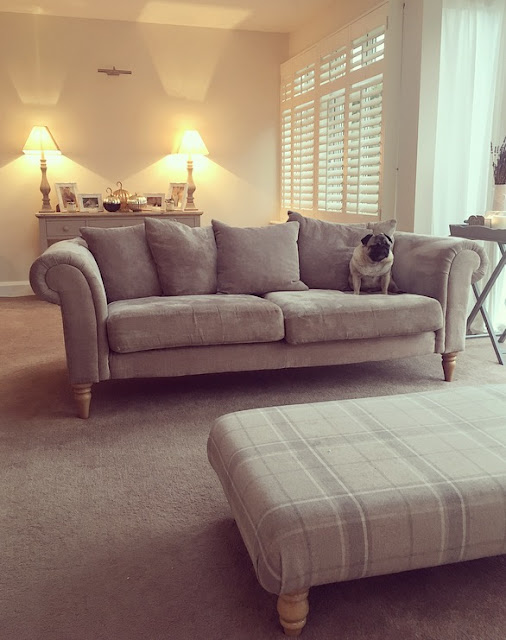 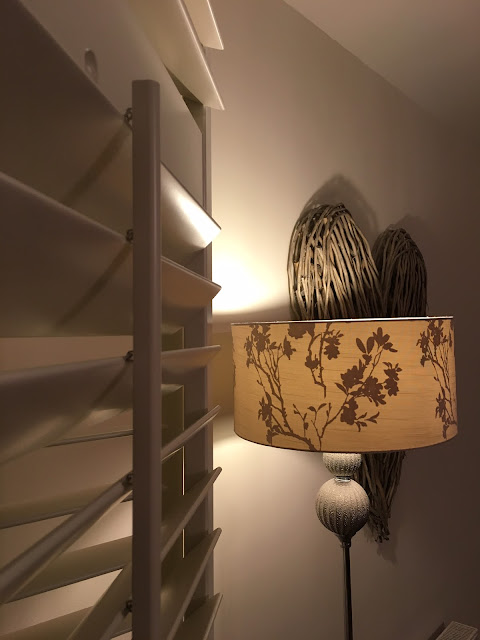 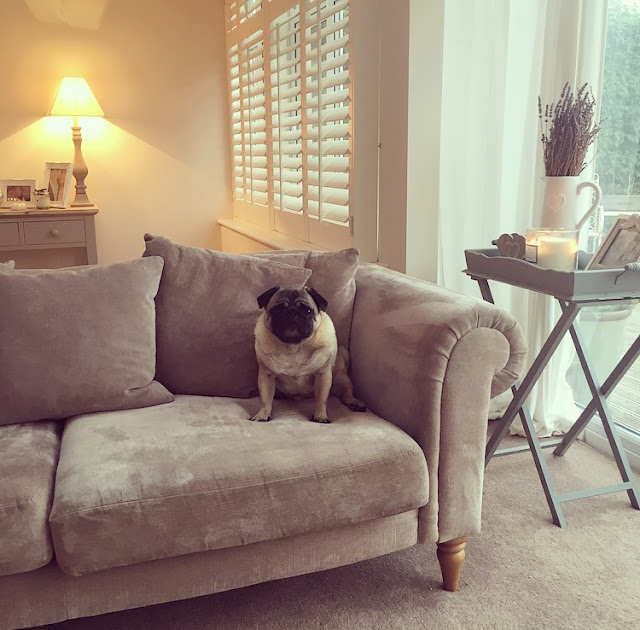 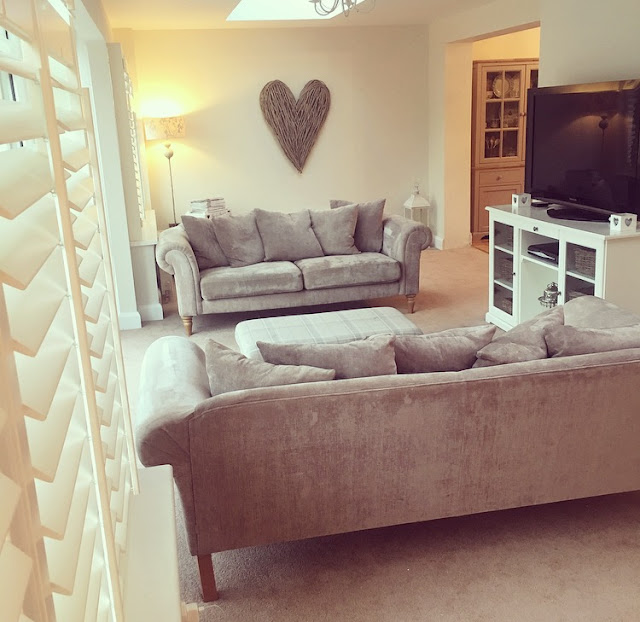 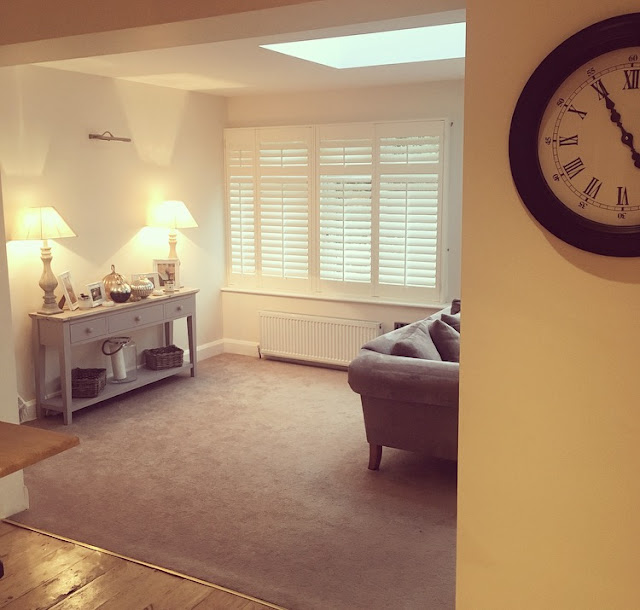 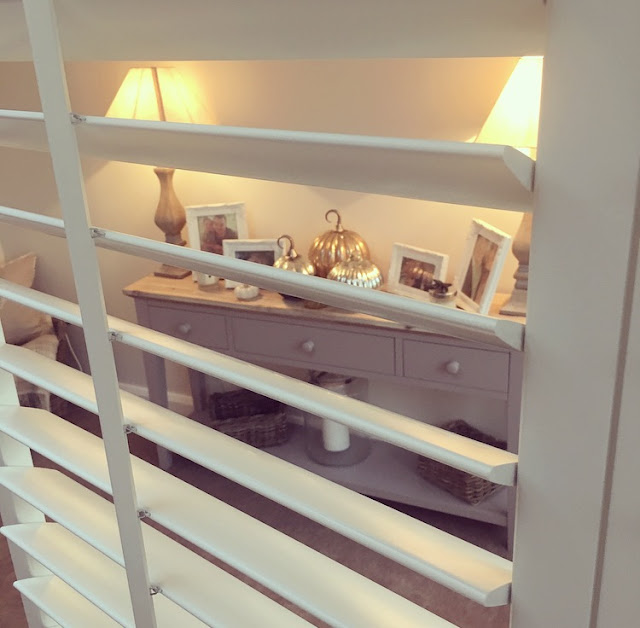 After receiving so many emails from all of you asking about them, the team over at California Shutters have been really generous & given my readers 25% off all shutter orders up until 30th November. I’ve been told that the max they normally give for any promotion is 20% so if you’re thinking of ordering then what are you waiting for?

To take advantage of this just enter ‘THTMM25’ at checkout. 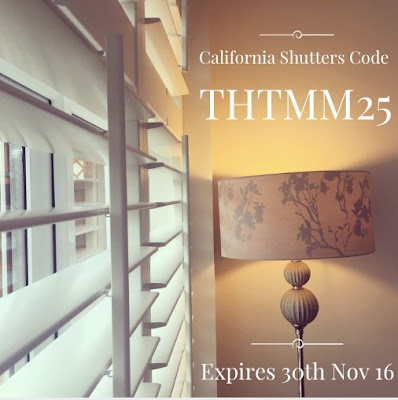 If any of you have any questions then please do leave them below & I’ll do my best to answer!